All the partners agree that future spatial and economic development within the city centre must not be constrained by an inadequate transport infrastructure. A transport network that meets the needs of visitors, workers and residents in the city centre by providing efficient, safe, reliable and sustainable access must be prioritised.

This must work on a day to day level but also in the context of major event days at the Millennium Stadium. The Masterplan presents the opportunity for the development of a contemporary high quality transport interchange which rationalises and reorganises public transport facilities to maximise the benefits of having a train and bus station in such close proximity.

The Masterplan seeks to remove many of the conflicts for cyclists traveling to the Train and Bus Stations. There are currently no designated cycle lanes into or across the Central Square Area.

Whilst cyclists can reach Central Station from National Cycle Route 8, which runs alongside the western side of the River Taff, less than 200m west of the site entrance via Wood Street and from the east via Saunders Road, they have to compete with cars, buses taxis and pedestrians for space.

The opportunity to link into this cycle route is considered in the Masterplan. Discussions with Sustrans have taken place and the overall strategy explained. This involves dedicated cycle lanes on Wood Street as the main East/West route with connections south to the Train Station, through the development and across the new public square.

Is intended that these spaces will be shared with no priority for cyclists (or pedestrians) so that it functions much in the same way as the Hayes, outside St Davids 2, which has proved to be a success. The detail design of junctions (Wood Street/Saunders Road) will follow but it is envisaged that Sustrans will participate in this process.

Rightacres is also keen to engage with Sustrans so that they contribute to the design of the Integrated Transport Hub. 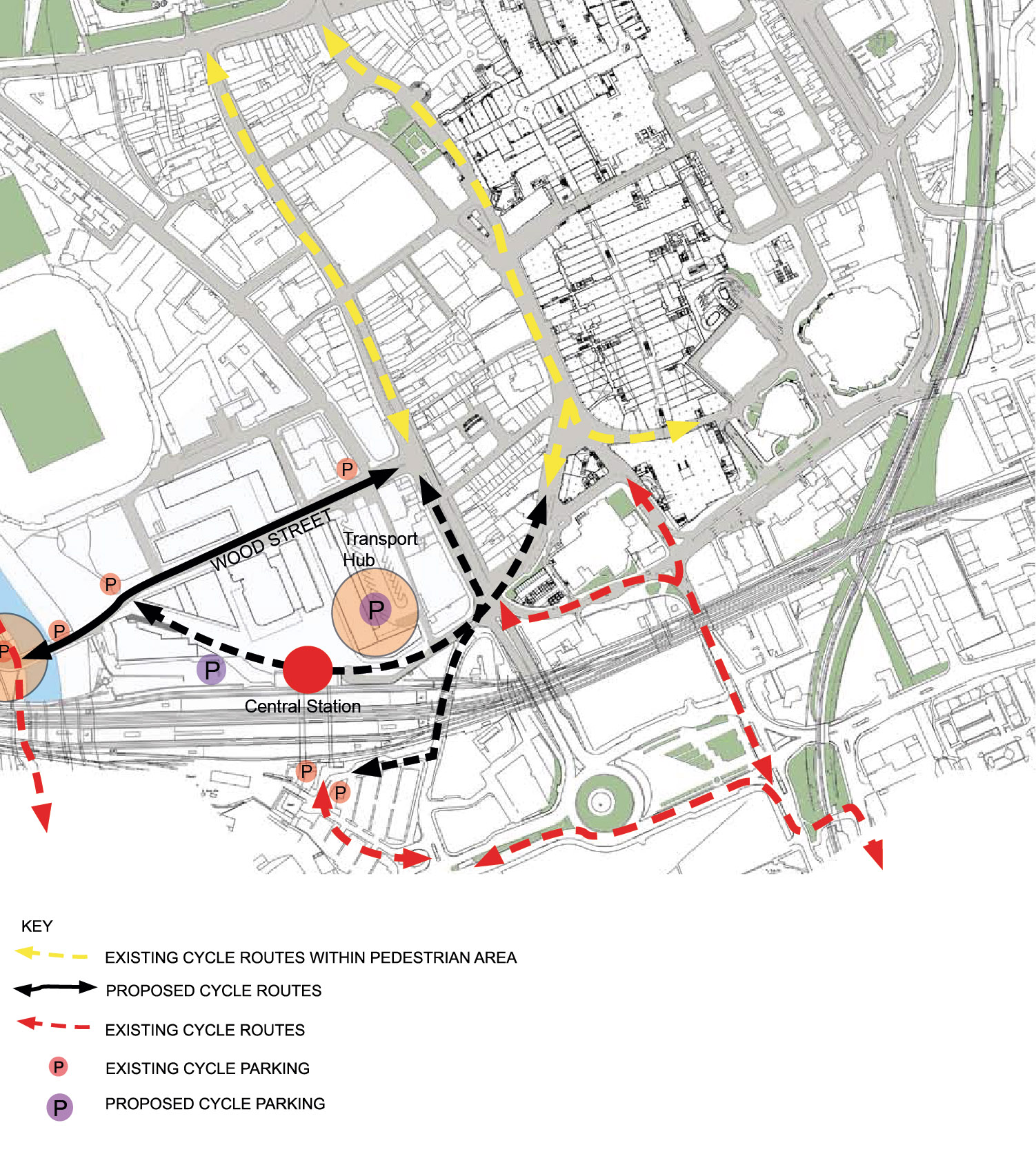 The redevelopment of Central Square, with the BBC and public space at the heart of this new quarter, requires the relocation of both buses and taxis from their current (detracting) locations at the front of Central Station.  This brings with it both challenges and opportunities.

Despite being so close to the Central Train Station, the bus station creates more of a physical and visual barrier than a connection, and conveys a poor first impression on arrival into the City. The great Town Planning commentator Ian Nairn in his essay on Cardiff in the 1960’s used T.S Eliot’s ‘shabby equipment always deteriorating’ quote to describe the experience of leaving Cardiff Central Train Station. Some 50 years later that analogy seems enduring.

A key element of the Council’s Transport Strategy is the need for a modal shift away from private car use. It is important therefore that the providers of travel services in Central Square, particularly Network Rail, Arriva Trains and Cardiff Bus, work collaboratively to deliver such a facility. Discussions with all of these organisation have informed the current Masterplan but it is acknowledged that this dialogue must continue at a meaningful level so that all options are considered and nothing is overlooked.

In addition to the purely functional challenge of just getting people around and about, a new integrated and high quality transport network will play an essential role in creating a positive image of the public and urban realm in Cardiff. It also aligns with Cardiff Council’s economic and tourism aspirations as it will elevate the experience of visitors to the city

There are currently two taxi ranks operating in Central Square. The Saunders Road rank is operated on a permit basis by Arriva Trains whilst the minimal number of spaces in front of the station are open to any licenced cab, and therefore liable to be in high demand – taxis at the front of the station often compete with private vehicles seeking to “kiss and drop”. Whilst taxis are an important component of a transport hub, they can visually detract from an area, especially at off peak times when large queues form.

The Cardiff Taxi operators forum has said that important factors for their members are:

The challenge for this Masterplan is to relocate the existing taxi ranks to a location that is both convenient for customers and does not detract from the gateway setting of Central Square. In relocating the taxi provision, the critical consideration is the spatial sequencing of activity so that the pick-up and set-down are correctly placed for customer convenience, and queues can be appropriately managed. A number of locations have been considered including Wood Street, Penarth Road, the new bus station site, and south of the railway station. 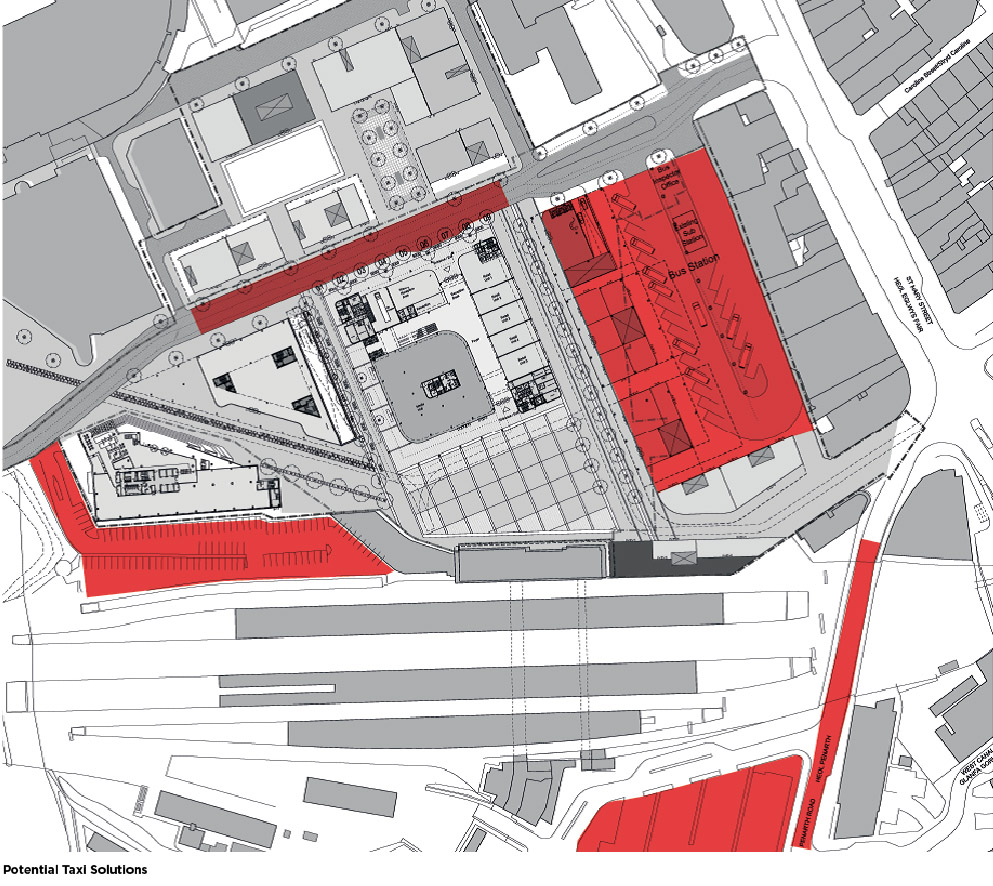